by Li'l Chuck The One Man Skiffle Machine 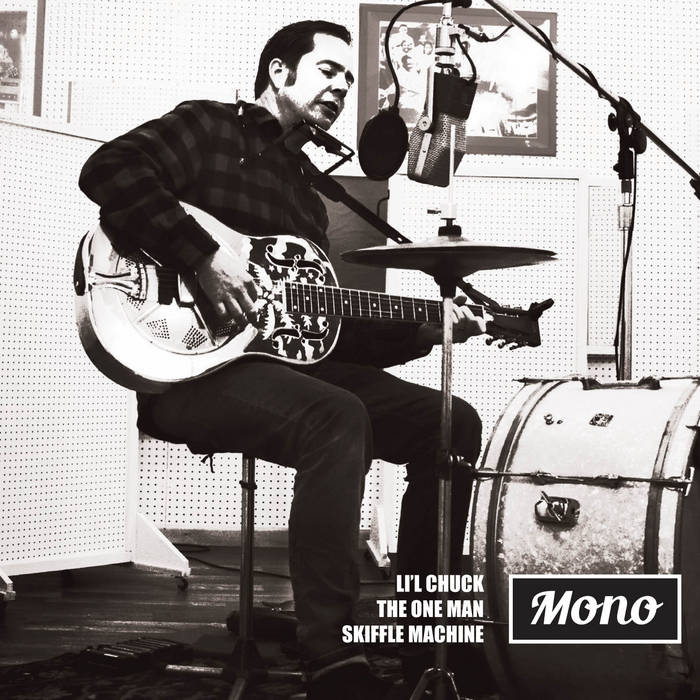 When music is pared back to its very bones, there’s nowhere to hide, yet it’s exactly when multi-instrumentalist David Thorpe (aka Li'l Chuck The One Man Skiffle Machine) performs at his very best.

For his third studio album, MONO, the independent Christchurch-based performer was determined to go back to basics to record all 14 tracks in a one-day session, capturing single takes with no overdubs, and using entirely 1950's mono recording equipment, direct to tape.

It’s a dynamic, lively, foot-stomping vibe that may have its origins in New Zealand’s South Island, but instantly transports you across the globe, between genres, and throughout decades.

Li’l Chuck’s music is a nostalgic melting pot of influences – driven by his harmonica, resonator guitar and vocals, and underpinned by kick drum, and hi hat - it pays homage to the artists who have graced the stage before him. Yet, the result is a sound that’s entirely his own.

The place to make MONO a reality was none other than Sugar Ray's Vintage Recording Studio, located in Essex, UK.

After stumbling on a video of their vintage recording techniques, he booked a session, and travelled nearly 12,000 miles to record with engineer Dean Amos. Post production and mastering was completed by Lincoln Grounds (Thomm Jutz) and released on Thorpe’s own label, Backyard Music.

“Working at Sugar Ray’s was a meeting of minds, and, being a nostalgic fella, recording through their vintage gear was a buzz,” says Thorpe. “I was working with the gear my idols would have used. I like the raw, simplistic, organic, honest, uncomplicated, naked approach. I like warts n’ all, bumps and scrapes. Capturing the energy of a performance, not over-thinking it.”


From the free-spirited Backyard Harmonica Boogie, to the heartfelt Crying, all tracks touch on musical influences from the 1930s to 50s, inspired by the sounds of the Blues, Early Jazz, Western Swing, and Ragtime, uniquely presented in the style of our founding street performers.

Storytelling is at the album’s very core, as Thorpe skilfully plays all his instruments simultaneously. He’s famously passionate about the one-man band craft, something he has held onto ever since he saw iconic busker Rob Gray, of “The Little Big Band”, perform on the UK streets in the late 1980s. He was only 18, but says, from that moment, a mental photograph was captured and everything fell into place. This has influenced everything he’s done musically since.

While he continued performing in the intervening years, it was 2011 when he hit a turning-point, and knew it was time to finally record his one-man band music. Having just turned 40, and welcomed his first child, the devastating Christchurch earthquakes struck, demolishing his home.

Realising time was short, it spurred him to follow his dreams, and he set about writing and recording. The resulting album was Blues in Full Swing (2015), followed by 2017’s Utility Blues.

This time around, as he gears up to release MONO, he’s proud to be bucking the trend by paring back his music to its core essentials – exactly as his idols would have done.

“With this album, it’s so raw, there’s nothing to hide behind.

This is as they would have done it...You go into the studio really well rehearsed, play and then go home.”

The first single to be released off MONO will be, Right by My Side, available on all platforms from 1 March

Originally hailing from the UK, Li’l Chuck (David Thorpe) relocated to Christchurch, New Zealand, in 2003, and has been showcasing his talent there ever since.

With more than 25 years of performance, writing and recording experience, he spent more than a decade in Christchurch's legendary Irish group, 'The Black Velvet Band', and managed 'The Vanguard', the official house band of The Crusaders’ rugby team in Canterbury.

He recently supported American legend Jimmy Buffett, Bluesman Jerron “Blind Boy” Paxton, and, The Topp Twins, and has helped audiences get in the party spirit at events such as, The Hokitika Wildfoods Festival, Kaikoura Seafest, New Zealand Cup and Show Week, The New Zealand World Buskers’ Festival, and The Great Kiwi Beer Festival.

Other highlights include working alongside the Christchurch Symphony Orchestra, and performances at the Rugby World Cup, and Cricket World Cup.

"A true multi-instrumentalist and multi-tasker, in addition to a talented artist".

Blessed with the ability to handle multiple instruments at a time, he is the master of coordination: blown', suckin' and plucking' simultaneously. He has spent a lifetime rummaging through the drawers of 30's - 50's music. His songs are inspired by the sounds of the era ... more

Bandcamp Daily  your guide to the world of Bandcamp

Featuring appearances from Kari Faux, Bluestaeb and and interview with NY-bred artist Wiki